The optimizer is a unit that improves neural network parameters based on gradients. (I am currently not aware of the optimizer method that is not using gradients).

A good optimizer would train the parameter tensors in a shorter number of steps, comparing the worse one (assuming same accuracy and similar computational time).

The very basic optimizer will do:

Check my backpropagation article article that shows the process of calculating gradients is not so hard. Also PyTorch training model article explains there are the forward and backward passes.

A mini batch is a package of items. This may be the package of images, or audios, or text, or gene sequence.

Since we calculate the gradients of every mini-batch although we don’t know what we may expect inside gradient tensors, we may assume gradients vary from mini-batch to mini-batch.

It would be nice to predict the moving trends for our gradients taking into account every mini-batch so far. This may involve analyzing the average moving gradient.

Since there may be millions or even hundred millions of parameters in our neural network it would be demanding to track each gradient for each parameter at each step $i$.

For some applications a simple moving average (SMA) is used. That would calculate the gradient mean based on all previous gradients. 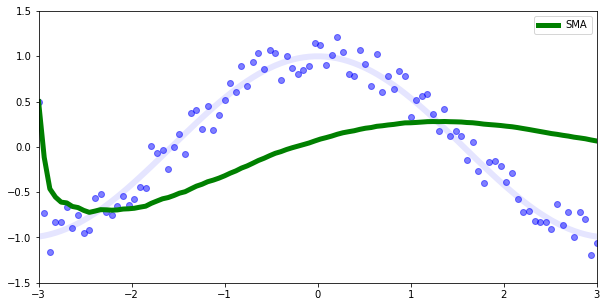 But, this kind of mean doesn’t promptly reflect actual data as we can see in the previous image.

For instance if we have a cos function and some random noise (the blue points) we would expect our prediction to be the transparent blue line, but instead the SMA is a green line.

Luckily there are other techniques.

Here $a_i$ is the average moving gradient. I will show two data models in PyTorch to explain EWMA.

Let’s consider this normal data distribution for y with offset 0.3. 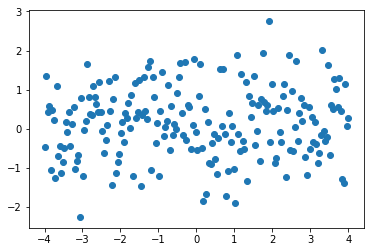 If we take the next equation to calculate the moving average a:

depending on momentum $\beta$ we may have different results.

Model 2: Data distribution is cos function with some noise

Let’s define our data and plot an image: 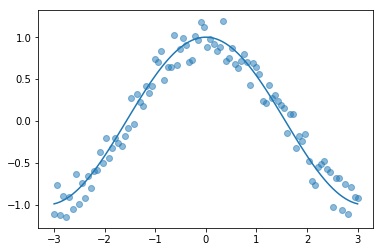 The thin blue line is our cos function. We used it to calculate the scatter plot (the blue dots). Now we are trying to fit on a scatter plot. We use the EWMA again.

Check out that again the momentum $\beta$ plays a huge role on our output. If our momentum is too small like 0.01 we will be far away from the original cosine function.

If you check for the $\beta$ of 0.99 we are still not predicting well, but there is a trick called debiased EWMA.

So let’s create a new SGD optimizer with momentum, dampening and debiasing when we know all that.

Original SGD optimizer is just a port from Lua, but it doesn’t have this exact debiased EWMA equation, instead it has this one:

For $dampening = \beta$, this would fit EWMA. Be careful still, because the default $dampening$ is 0 for torch.optim.SGD optimizer.

This code shows several things. It uses the PyTorch Optimizer base class. This means the SGD has parameter state memory for every parameter. You can check optimizer.state_dict() to check this at any time.

Also, it knows how to deal with param groups. The param group is the idea where we group arbitrary parameters into groups. The only constraint is we cannot feed the same parameter to multiple groups.

The last line of the step method updates the current parameter based on the learning rate and also based on the average gradient.

This last line is the basic gradient descent formula, with our gradient dampened and debiased.

The state['avg_grad'] is what will be preserved for the next step, as this is not what is the avg from the last line of the step method.

This optimizer may be slightly improved for speed considering the ** operation but in general it should behave even better than the original PyTorch SGD.