Sampling algorithms produce answers by generating random numbers from a distribution of interest.

One fundamental problem in machine learning is to generate samples $x_i$ from some distribution $p(x)$.

$p(x)$ is notation of continuous and $P(x)$ of discrete distribution.

Frequent we search for the expectation $\large \mu$ of any function $f: \mathbb R \rightarrow \mathbb{R}$ under that distribution:

Monte Carlo method is when we use the samples $x_i$ to find the expectation of $f$:

Monte Carlo sampling depends on the sample size $\large n$ and should not depend on the dimensionality of the random variable $X$ or cardinality.

My idea is to provide a basic classification and intuition for the methods. You may check the reference materials for the strict mathematical definitions and more details.

Importance sampling takes an easy-to-sample distribution $q(x)$ into play from where we generate samples.

We use un-normalized distribution $\tilde q(x)$ in general case to generate $n$ samples and then we compute:

In there $\tilde p(x)$ is also an un-normalized distribution.

The expectation of $f$ is then:

As we say importance sampling is not a method to direct sample from distribution $p$, instead we used another easy-to-sample distribution $q$.

Sampling methods from a distribution with density $p$ are used in these most common cases:

Accept-reject or rejection sampling method is used to sample from hard-to-sample distributions. In here we sample based on acceptance or rejection. 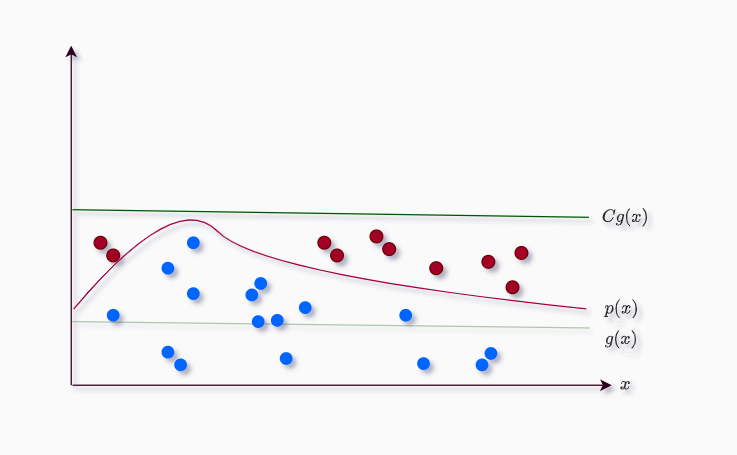 Assuming $p(x)$ is a hard-to-sample distribution and $g(x)$ is uniform distribution. We find the constant $C$ such that:

Anything above the $p(x)$ will be rejected (red) and anything below will be accepted (blue), thus the name.

The only condition we are using is one If condition to check if the current sample is greater than $p(x)$, or smaller or equal to $p(x)$.

We frequently consider the case where $q$ is uniform, but it is possible to use any easy-to-sample distribution. $q$ is known as proposal distribution.

This is why when we think of sampling methods we often think of MCMC.

The defining characteristic of a Markov chain is that no matter how the process arrived at its present state, the probability of possible future states are fixed.

We may use the matrix notation to describe the random process of Markov chain:

At each time interval there is a fixed probability to switch to any state. After many time steps states we may or may not converge to stationary distribution.

In the next Markov chain will not converge to stationary probability distribution (states are altered each timestep): 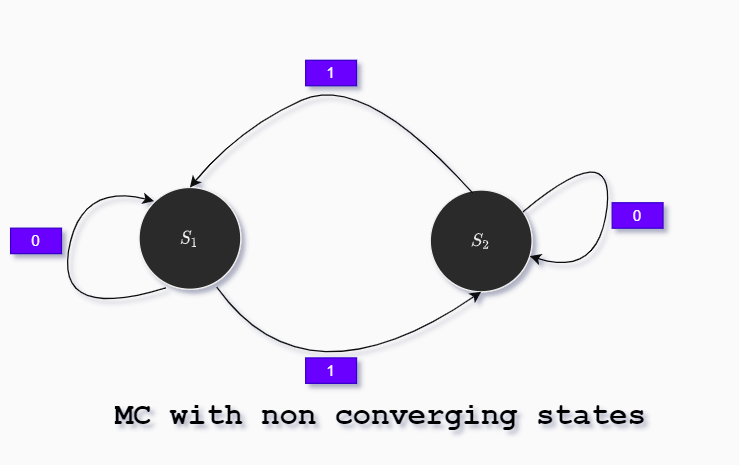 Opposite the next Markov chain will converge to stationary distribution: 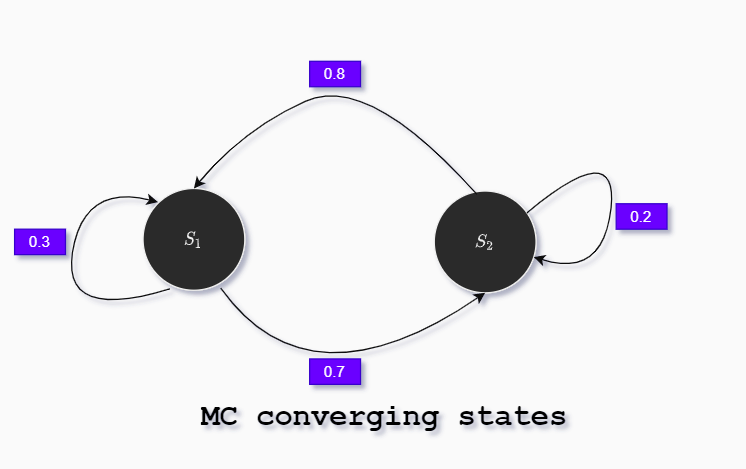 To calculate the stationary states we use the following Python code:

Another way to work on the same problem is this matrix calculus:

As you may note we have the exact same result as in the first Python example.

You may think this has to have something with the init state, but if you alter the init state: state = np.array([0.5, 0.5]) # init we get the same result.

We found what is called the stationary distribution of states and frequently we denote it with $\pi$. The first Python example is simple Monte Carlo and the second is Markov chain Monte Carlo method. The first example had 100000 iterations while the second method had just 20 iterations. In general MCMC perform faster than naive Monte Carlo.

The math behind MCMC:

This would be formal expression of sampling:

Examples where we use MCMC:

Now we will explain a few MCMC sampling types.

Gibbs sampling is sampling from a $N-$dimensional distribution where single iteration means sampling $N\times$ in 1d.

After some number of iterations we get a sample that converges to the original distribution.

As you may see for our 3D case we have 3 steps (states) per time state. Gibbs sampling is easy to implement, but it is relatively slow when dimensionality is big.

Metropolis-Hastings algorithm is MCMC method for obtaining a sequence of random samples from a probability distribution $p(x)$ from which direct sampling is difficult.

Metropolis-Hastings is a six step algorithm:

Requirement: For a given probability density function $p(x)$, we only require that we have a function $f(x)$ that is proportional to $p(x)$!

MH is extremely useful when sampling posterior distributions in Bayesian inference where the marginal likelihood (the denominator) is hard to compute.

These features allow HMC to converge in high-dimension distributions better than Metropolis-Hastings or Gibbs sampling.

Gibbs sampling is considered as a special case of Metropolis-Hastings.

HMC performance is highly sensitive to:

No-U-Turn Sampler (NUTS), an extension to HMC that eliminates the need to set a number of steps $L$. NUTS uses a recursive algorithm to build a set of likely candidate points that spans a wide swath of the target distribution, stopping automatically when it starts to double back and retrace its steps.

Here is a short overview of MCMC software:

The first-made software for MCMC was BUGS: Bayesian inference using Gibbs sampling, made in the 1990s.

Inspired by BUGS, a parallel effort called JAGS or Just another Gibbs sampler had integration with R language.

Variational algorithms are a family of techniques for approximating intractable integrals arising in Bayesian inference and machine learning. They treat inference problems as optimization.

Although sampling algorithms were invented first ( during the II world war ), variational inference methods dominates the field because these methods are fast.

VI methods are invented in sixties and these are approximation algorithms. 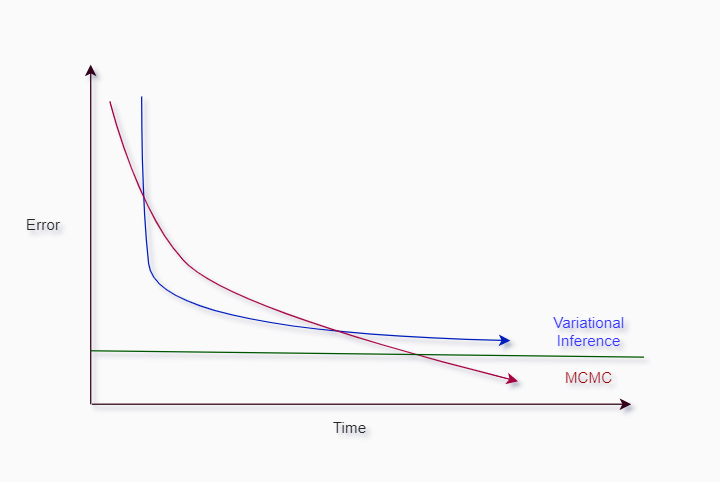 Short feedback of the two techniques: